You can visit it in the various campus CRAIs that the university has throughout the territory following her itinerary on CRAI Agend. 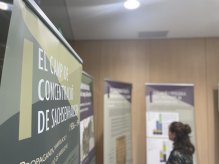